Globally, the twenty-first century has seen 16 of the hottest 17 years on record. In the Pacific Northwest, average air temperatures, which rose only 1.3 degrees Fahrenheit between 1895 and 2014, are expected to increase another 3 to 9 degrees Fahrenheit by 2100. Heavy rainfall events have increased in frequency, snowfall has decreased, and glaciers have pulled back, retreating deep into Washington’s mountains. The Anderson Glacier, for example, which historically fed the Quinault River, shrank by 90 percent between 1927 and 2009. And as overall precipitation decreases and glaciers shrink, stream flows are also declining.

“One of the critical components to creating this relocation institutional framework is to design a community-based monitoring and assessment tool with state and federal government agencies,” Bronen says.

Such a tool would help ensure that, before disaster strikes, people are able to determine whether relocation is necessary, and when. Bronen expects the model will be replicable in service of communities across the world. That’s a tall order. “We are creating something that doesn’t exist anywhere in the world, so it’s just really hard,” she says. 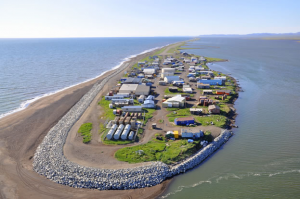 To read the whole article alternet.org