We Will Protect The Human Rights Of ‘Dreamers’ 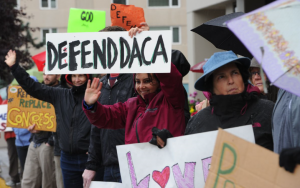 Ana Lavagnino, center, who said she is a daughter of an immigrant, shows her support for DACA (Deferred Action for Childhood Arrivals) during a rally in Anchorage on Tuesday, Sept. 5, 2017, in the wake of President Trump’s announcement to end protection for hundreds of thousands of “dreamers,” children who were brought to the U.S. and have been living here illegally. (Bill Roth / Alaska Dispatch News)

President Donald Trump’s decision to rescind the program for immigrant youth is devastating for Alaskans.
I work as the executive director of the Alaska Institute for Justice. We are the only nonprofit in Alaska dedicated to protecting the human rights of all Alaskans that provides free and low-cost immigration legal services.

Since President Barack Obama created the Deferred Action for Childhood Arrivals program in 2012, our office has represented dozens of young people seeking the basic documents that allow them to come out of the shadows of our community.  DACA allowed these youth to acquire temporary permission to be in the United States.

With this immigration process they could, for the first time, get authorization to work, Social Security numbers and drivers licenses. Some are parents, grandchildren, and siblings of United States citizens.

They came to the United States from Israel, Russia, Samoa, El Salvador, Guatemala, Honduras and Mexico. They are university students, business owners, disabled, hard workers and just wanting the opportunity to pursue their future dreams. They are us.