Our mission is to promote and protect the human rights of all Alaskans including immigrants, refugees and Alaska Native communities by providing critical services including: Direct legal services to Alaska’s immigrant and refugee communities, prioritizing legal representation for survivors of domestic violence, sexual assault and human trafficking and those fleeing torture and persecution in their country of origin; Language Access through trained interpreters and translators for legal, medical and social service professionals, and clients; Social and Climate Justice work with Alaska Native communities.

Founded in 2005, the Alaska Institute for Justice is the only agency in Alaska dedicated to protecting the human rights of immigrants and refugees. Based in Anchorage and Juneau, our staff provides statewide comprehensive immigration legal services, as well as language interpretation and translation services throughout Alaska. Collectively, AIJ Board and Staff have more than 25 years of legal experience serving Alaska’s immigrants and refugees.

In addition to providing quality direct legal services, AIJ staff members serve as a critical resource for state and federal public agencies on issues involving immigrants and refugees. Health care providers, social service providers, state officials, criminal defense attorneys, prosecutors and judges are just a few of the professionals in our state who rely on the expertise of the AIJ staff.

Learn about AIJ’s history and impact through the series, “Human Rights: Legal, Social, and Climate Justice”

The Alaska Institute for Justice’s (AIJ) mission is to promote and protect the human rights of all Alaskans, including immigrants, refugees, crime victims including survivors of domestic violence and sexual assault, and Alaska Native communities by providing critical services to these underserved populations through legal representation, language access, training, and educational programs and advocating for climate justice.

This series of six articles, Human Rights: Legal, Social, and Climate Justice, explores the origins of AIJ 16 years ago, the various programs it offers, and its impact on our state in its unwavering devotion to preserving and defending the rights of all Alaskans. 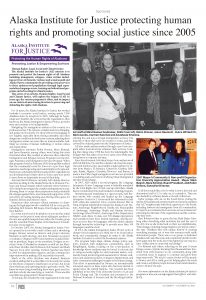 For 16 years, the Alaska Institute for Justice has worked tirelessly to promote social justice, serving nearly 7,000 Alaskans since its inception in 2005. Although its beginnings were humble, the services that the organization, then known as the Alaska Immigration Justice Project, provides were and continue to be indispensable.

Navigating the immigration system in this country is a perilous journey. The rules are complex and ever-changing, and justice moves slowly. For those whose first language is not English, especially

those fleeing untenable and often dangerous conditions in their home country, adjusting their immigration status can seem like an insurmountable task. Many are victims of human trafficking or violent crimes and sexual abuse.

Immigration attorneys Robin Bronen, Mara Kimmel, and Jason Baumetz, among others, were facing this crisis first-hand when they worked at what was then called the Immigration and Refugee Services Program (now the Refugee Assistance and Immigration Services Program. When that program closed in February 2005, they quickly realized that the community’s need for low-cost or pro bono legal assistance was burgeoning and could simply not be ignored. Numerous community members and partner organizations stood behind them in their effort to form a new non-profit to serve those so desperately in need of their help. [Read More] 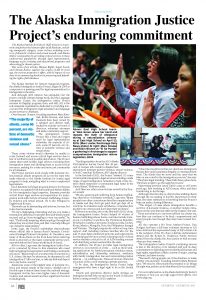 The Alaska Institute for Justice’s inaugural program, the Alaska Immigration Justice Project, began in 2005 as a response to a pressing need for legal representation for immigrants in the state.

And although AIJ’s mission has expanded over the years to include climate change work, and the Language Interpreter Center, the Immigration Justice Project remains its flagship program; then, and still, AIJ is the sole statewide organization dedicated to providing low-cost and free immigration legal assistance and language access services to Alaskans.

Over the past 16 years, founding members Mara Kimmel, Robin Bronen, and Jason Baumetz have been joined by a talented and diverse staff, backed by a hands-on board of directors, volunteer attorneys and wide community support. The Immigration Justice Project fills a vital and urgent need for legal representation statewide; the majority of clients, some 65 percent, are victims of domestic violence and sexual abuse. [Read More] 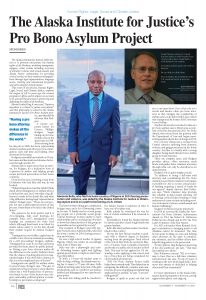 A former corporate lawyer for Conoco Phillips, Rodgers began taking on pro bono asylum cases in his spare time in 1998. After retiring from his day job in 2008, he’s been representing clients in asylum and other pro bono immigration cases full time and helping other attorneys do the same.

Rodgers personally has worked on 30 asylum cases and has mentored dozens of attorneys through another 50. Asylum law is much more than an interest, for Rodgers, it’s a dedication born of

a passion for justice, and helping people escape peril and persecution in their home countries.

From his first case, involving a man from El Salvador who had fled civil war, he was hooked. [Read More] 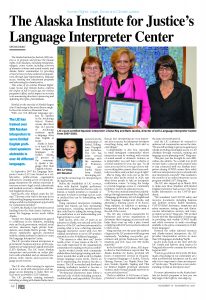 Nestled on the east side of Alaska’s largest city of Anchorage is the most diverse neighborhood in America: Mountain View.

With over 100 different languages spoken by families in the Anchorage School District, census data show that 16.3 percent of Anchorage residents speak a language other than English at home.

Alaska is home to at least 20 distinct indigenous languages. In Bethel, Alaska, 63 percent of the community speaks a language other than English at home. In September 2007 the Language Interpreter Center (LIC) was formed as a collaborative, public-private organization dedicated to creating a pool of trained language interpreters for entities statewide to increase access to legal, social, educational, and medical services to Alaskans with limited English proficiency. [Read More]