With so much destruction from this season’s hurricanes in the Caribbean, there are going to be a lot of people on the move — looking to start their lives in new places. We’ve already seen mass movements of people from areas plagued by drought, floods or storms. Many casually refer to these people as “climate refugees.”

But the problem with the term climate refugee starts with the word “refugee.”

“The term refugee has some very serious legal consequences, and it’s a very rigid legal definition. It’s usually an individual determination based on a person’s fear of persecution,” explains Mara Kimmel, an immigration attorney in Anchorage, Alaska.

The legal definition of refugee goes back to the years following World War II when the United Nations defined a refugee as an individual outside of his or her own country, someone who can’t return because of a well-founded fear of persecution due to race, religion, nationality, political opinion or membership in a social group.

“I don’t think that’s necessarily translatable to a situation where whole communities are being forced to flee and to relocate because of climate change,” says Kimmel. 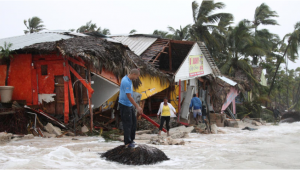 People walk among debris on the seashore in the aftermath of Hurricane Maria in Punta Cana, Dominican Republic, September 21, 2017.

To read the whole article wunc.org